For much of the past year, I have been working with Hexvarium. Based in Atherton, California, the company builds and manages fiber-optic networks. At present, they have a handful of networks in the Bay Area but have plans to expand across the US.

The act of planning out how a fiber-optic network will be deployed across a city has many constraints to consider. The process is capital-intensive so you want the network to archive uptake as soon as possible. My team builds optimal network roll-out plans. This is done by blending over 70 datasets together and weighing their metrics against a number of business goals. The following is an illustrative example of a roll-out plan.

The above plans are produced by LocalSolver which is fed data from BigQuery. The majority of datasets we use arrive either in ESRI Arc Geodatabase format or as Shapefiles, neither of which can be loaded into BigQuery directly. If a dataset is small enough or needs a lot of geospatial enrichments, we will load it into PostgreSQL with the PostGIS extension installed.

Below is a figurative example of a Geodatabase file being imported into PostgreSQL.

If a dataset has 100M+ records and needs to be joined to another dataset with at least 10M+ records, then we'll load it into ClickHouse instead. ClickHouse has taken some of our JOINs that would take 2-3 days in PostgreSQL and completed them in under an hour. It can also scale up individual queries by simply adding more CPU cores. That said, ClickHouse lacks much of the geospatial functionality found in PostGIS so we cannot use it for all workloads.

In this post, I'll walk through one such example.

The commands used in this post are running on Ubuntu but they can also run on macOS. To install them via Homebrew run the following:

I'll use PyArrow to examine a Parquet file at the end of this post.

ClickHouse can be installed via the following:

This post uses PostgreSQL 15 and ClickHouse v22.9.7.34. Both of these tools release new versions frequently.

Below is an example record from Microsoft's Buildings dataset. I've loaded it into PostgreSQL and enriched it with H3 hexagon values. It has 130,099,920 records, is 28 GB in PostgreSQL's internal format and takes up 61.6 GB of logical space once loaded into BigQuery.

The geom column is in Well-known Binary (WKB) format. The above value can be expressed in GeoJSON as the following:

The following shows a purple rendering of the above geometry with an OpenStreetMap basemap in QGIS. 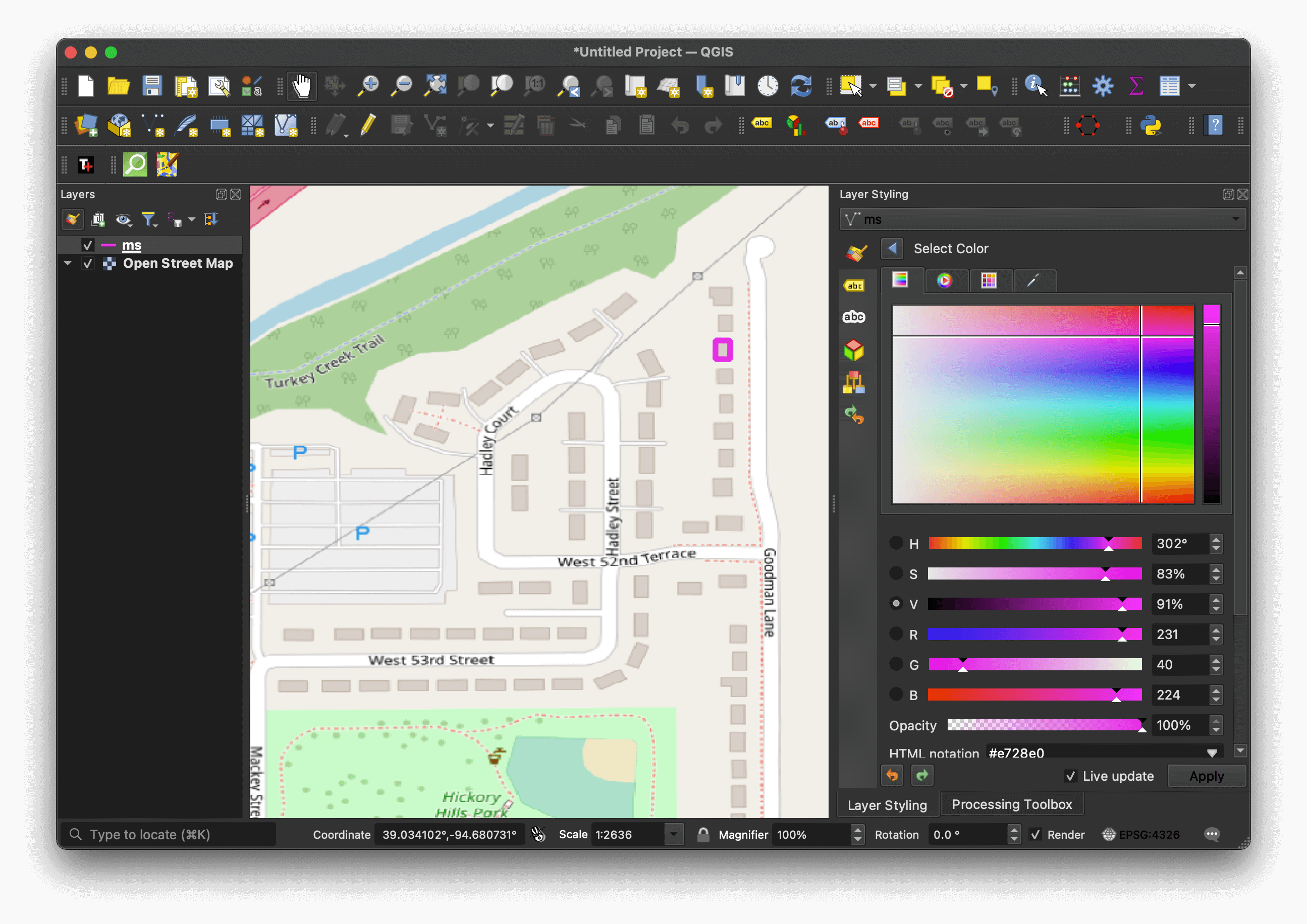 The following will ship the above table from PostgreSQL to BigQuery using GZIP-compressed CSVs.

The largest uncompressed CSV file size BigQuery will accept in a single load command is 4 GB. The above will break up the CSV data into separate files with no one file exceeding this limit. The CSV files are then compressed with the fastest setting GZIP supports. Higher compression settings have never resulted in faster end-to-end load times in my experience.

These are the resulting 12 GB of GZIP-compressed CSVs and their individual file sizes.

The following will load the CSVs into BigQuery in parallel.

The above psql and bq load commands together took 18 minutes and 11 seconds to run.

The following will set up a table in ClickHouse that sources its data from the microsoft_buildings table in PostgreSQL.

I'll create a table that is local to ClickHouse. This avoids any more single-threaded fetches back to PostgreSQL later on.

I'll then create a script to dump the contents of the ClickHouse table across 14 Snappy-compressed Parquet files.

I'll then run that script and load the resulting 16 GB of Parquet files into BigQuery.

The above took 14 minutes and 31 seconds to import, dump and transport from my VM to BigQuery. This is a 1.25x speed-up over using GZIP-compressed CSVs for transport.

The 16 GB of Parquet is 4 GB larger than the GZIP-compressed CSV files but the disk space and bandwidth savings failed to have a positive impact on the end-to-end transfer time. To add to this, ClickHouse took better advantage of the cores available during the 14-thread dump to Parquet versus what pigz could do.

The Parquet files use Snappy compression. Snappy was designed to compress faster while accepting the trade-off of lower compression ratios compared to other codecs. Storage and network throughput rates have increased faster than single-core compute throughput has in the past 20 years. When a file will be consumed by millions of people, the compression ratio is key and it's worth taking longer to compress. But when a file is only ever consumed once, it's more important to get to the point where the file has finished decompressing on the consumer's side as quickly as possible.

I'll dump a single Parquet file of the dataset and then pick it apart below.

Every column has been compressed using Snappy.

But of the 7 columns across the 1,987-row groups, over 30% have a compression ratio of 1:0.9 or worse. It's questionable if it was worth compressing these fields in the first place.

In 2016, Snappy had its heuristics increased to be more aggressive at avoiding compressing data that is unlikely to yield strong results. But with ratios like 1:0.9, it would be interesting to see if this could be taken further by turning off compression on a per-column basis.

Google also has a drop-in S2 extension for Snappy but support has yet to find its way into BigQuery. When I reviewed a Go and Assembler implementation of S2 in 2021, I found it could speed up compression by 4.2x and decompression by 1.7x over regular Snappy. Klaus Post, the author of the S2 utility, noted the speed-up should have been even greater had it not been for the I/O limitations of the laptop I ran the benchmark on.

Klaus has since pointed me to a benchmarks sheet where he managed to reduce a ~6 GB JSON file by 83% at a rate of 15 GB/s on a 16-core, AMD Ryzen 3950X. LZ4 took 10x longer to achieve a similar compression ratio on the same workload and GZIP took 74x longer. Snappy only ever managed a 75% reduction but even that was at a rate 16.5x slower than S2's 83% reduction rate.

Can Rust Do It Faster?

BigQuery also supports LZO and ZSTD compression in Parquet files so there is potential for further optimisations. I found json2parquet which is a Rust-based utility that can convert JSONL into Parquet files. It doesn't support LZO at this time but Snappy and ZStandard are both supported.

Shapefiles can be converted into JSONL quickly with ogr2ogr so potentially ClickHouse could be removed from the pipeline if json2parquet is quick enough.

I produced a JSONL extract of the California dataset. It has 11M records and is 3 GB in uncompressed JSONL format.

I then converted that file into Parquet with ClickHouse. It took 32 seconds on my 2020 MacBook Pro. The resulting file is 793 MB in size.

The following took 43.8 seconds to convert the JSONL into PQ with a resulting file size of 815 MB.

The only major difference I found was that json2parquet produced 12 row groups in its Parquet file and ClickHouse produced 306.

I did produce a ZStandard-compressed Parquet file as well with json2parquet and although the resulting file was 531 MB, it took 48 seconds to produce. Neither of these will reduce the compression overhead in ClickHouse.

I'd like to see if ClickHouse could produce a ZStandard-compressed Parquet file faster than its Snappy-compressed files but there aren't any CLI flags to switch the Parquet compression codec at this time.

Digging into the Rust Executable

I did check that the Rust binary is using vectorised instructions. The following was on an Ubuntu 20 machine.

I then ran 10 lines of JSON through both ClickHouse and json2parquet to see what strace reports.

There were 434 calls to write made by json2parquet which is where it spent 61% of its time. ClickHouse only made 2 calls to write with the same workload.

I thought that there could be an excessive number of context switches or page faults slowing json2parquet down but both of these occurred an order of magnitude more with ClickHouse.

Dominik Moritz, a researcher at Apple and one of the co-authors of Altair is the developer behind json2parquet. I raised a ticket asking him if there are any compilation settings I could adjust.

But given his project is made up of 193 lines of Rust and is largely dependent on the Rust implementation of Apache Arrow, I suspect that the performance bottleneck is either in Apache Arrow or that more compression settings need to be exposed if there are any performance improvements to be found.

A day after I originally looked into this I ran the benchmark on a fresh 16-core VM while collecting telemetry for the Apache Arrow team. The performance difference ended up being 4x between json2parquet and ClickHouse. During the re-run, I spotted json2parquet maxing out a single core while ClickHouse was better able to take advantage of multiple cores.

I found using PyArrow was 1.38x slower than ClickHouse, Awkward Array was 1.5x slower and fastparquet was 3.3x slower.

After raising the above performance tickets I decided to be fair to the ClickHouse project and see if there were any obvious performance improvements I could make with their offering as well.

It would be great to see data vendors deliver data straight into the Cloud Databases of their customers. It would save a lot of client time that's spent converting and uploading files. The Switch from Shapefile campaign notes there are at least 80 vector-based GIS file formats in use and knowing the pros and cons of each of these formats for your use case is a lengthy learning exercise.

Much of the GIS world is focused on city and state-level problems so it's common to see Shapefiles partitioned to at least the state level. When your problems are across the whole of the USA or larger, you're often dealing with datasets that are at least 100M rows in size. 100M-row datasets in PostgreSQL can be really slow to work with.

It would also be good to see GEOS, GDAL and PROJ integrated into ClickHouse. This would give users much of the functionality of PostGIS in what is one of the most performant open source databases. 100M-row datasets are small by ClickHouse's standards but the lack of GIS functionality is holding it back.

Formats like GeoParquet should see strong adoption when they're the preferred file-based transport for USA-wide GIS datasets if there is strong compatibility with a GIS-enhanced ClickHouse. I've seen a 400 GB PostgreSQL table compress down into 16 GB of GeoParquet. Dragging files of that size onto QGIS on a laptop will render it unresponsive for some time but pointing QGIS at that sort of dataset in a GIS-enhanced ClickHouse would be a different matter altogether.